I am not going to get into the nitty-gritty on the 509 in this post, I am just going to highlight some of the things that I like about the gun. Probably the most significant, is the grip texture. Even though aesthetically the multiple grip textures thing is kind of odd, FN at least took the texture high enough on the gun to be useful. Most handgun manufacturers stop the grip texture somewhere around where the magazine release is, which for how high I grip a gun, is not near high enough.

Usually, I am not a fan of hinged triggers. Most of my experience with hinged triggers is on M&P’s, and those triggers are kind of flimsy, which contributes to a mushy trigger. FN did it right, and made their hinged trigger beefy. This mitigates the mushiness found in S&W’s version of the hinged trigger safety, and really I have no issues with FN’s iteration.

The 509 also has some really nice slide serrations, including on the front of the slide. They did this right, and the serrations are very usable. Sometimes, even though a gun has serrations that look nice, they don’t really work as well as one might. I dig the 509’s aggressive serrations.

I like that the gun comes with nice and beefy metal sights. There is at least one manufacturer that things metal sights are not necessary. I wish the front blade was a bit thinner than it is, but hey, at least it is a start. The sights that I have are the luminescent sights. Meaning, shine a light on them and they glow in the dark. I am not really a fan of those sort of sights, I think the practical application of that technology is not really all that great. I would rather have just some standard white dots, or true night sights with tritium vials installed (which is an option, I just don’t have them). The sights are three dot style, but I pretty much always black out the dots on the rear sight to reduce visual clutter when shooting, and the 509 is no exception to that practice. 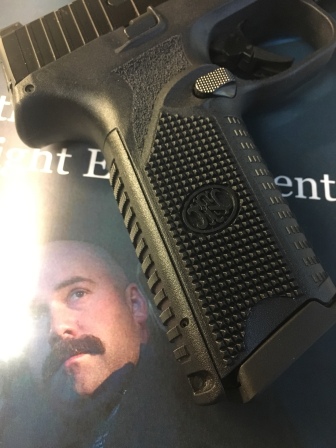 Last on the list, for a gun that just changes back straps, it really does change the feel of the gun, much more than changing back straps on something like a Glock, even though changing the back strap does not change the distance from the beaver tail to the face of the trigger. So while it doesn’t change reach to the trigger, it really does transform how the gun feels in the hand. I have not noticed any performance change from one back strap to the other, but from an ergonomics standpoint, there is a difference. Even though I have pretty big hands, I actually prefer the smaller back strap because it allows easier access to the bottom side of the beaver tail.