I have this thing for shooting drills intended for semiauto handguns with my revolver, as noted by my FAST runs with the revo. I decided to take a swing at the 10 Round Assault Course too. As you can tell by the name, it requires 10 rounds, my revolver only holds six (surprise!!). So while my semiauto counterparts gets to run the drill sans reload, I have to add one. On too of that, wheel gun reloads are sloooowwwwwwww.

So I gathered myself up, dumped a speedloader in my pocket, and went to the 25 yard line. To be homest, by 25 yard shots felt really slow. I think I could game the drill a little a shave a couple seconds on those two shots. If I land them on paper I am good to go points wise, but I always try to put them in the 10 ring.

Once I get to the 15 yard line the shooting gets easy. It is more about being able to make that shift from moving quick, to slowing down and shooting well. Make the move to the 7 yard line, the shooting gets really easy here. Then, reload. The reload comes at the most inopportune time, right in the middle of a string of fire. I was able to get the reload from the pocket in just over 5 seconds. Pretty solid time for me. Get my last shot from the 7 and then the 3 on the move. My time ended up being 24.89, and a score of 95. My take away is shoot faster and give up a couple more points to try and get it under 20 seconds. I think I can shave at least 2 seconds from the 25 yard line, maybe 3. The rest of the time is probably at the 25 yard line. Inhave almost given up on reloading any faster. It is taking way too much training input to get faster. A lucky 4 second reload would be welcome though. 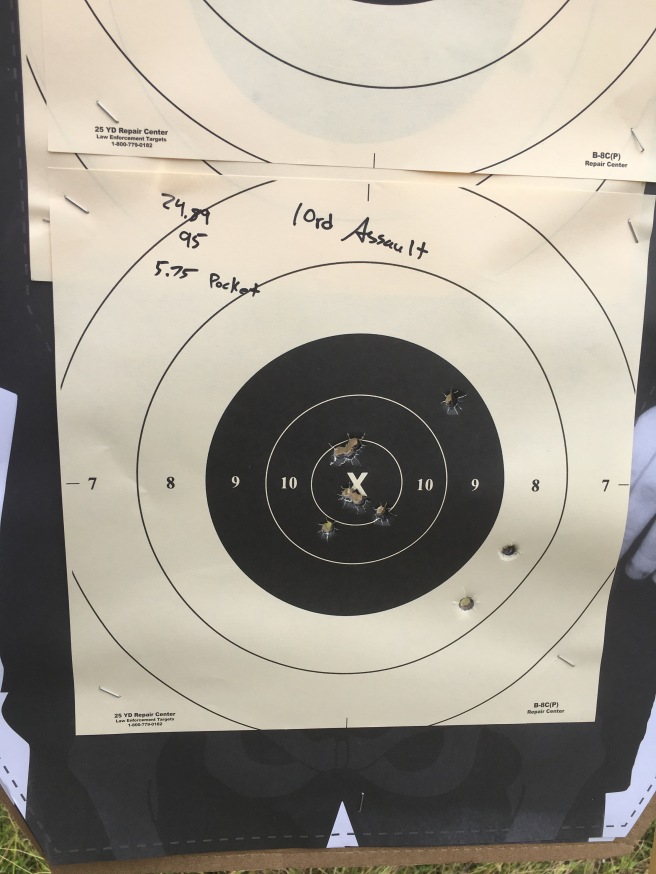 I used to not like this drill, but having shot it a few times now I have come to appreciate it. The accuracy standard is high enough, and the movement between strings is a nice change from normal accuracy drills. I don’t know that I would use it as a drill per se, but as a test, like the FAST, I think it is pretty good.