A few weeks ago, I was running some Hornady 135gr .357 Magnum Critical Duty rounds through my revo. This had been my chosen carry load, and I had about 100 rounds of it through the gun up to that point. There had been one function issue early in that round count. I attributed it to a wheel gun that had sat in a safe for nearly 2 decades with zero maintenance or lubrication. I lubed up the revolver as it should be, and didn’t have any issues for the next few boxes of Hornady ammunition. I also never had issues with any of the other ammunition I shot, including other .357 loads. Until a few weeks ago anyway. I had been carrying the same ammunition in my gun and in my speedloader for about a month, and decided to shoot it to make sure the carry load was still going to function after being carried everyday for a while. I fired the first 5 rounds, and the revolver locked up after the 5th round. I fixed it, fired round #6, reloaded the gun with another 6 rounds of Critical Duty and had the same malfunction a few rounds in. Decided to shoot the box of Critical Duty I had brought with me to replenish my carry ammo, and had one more malfunction just like all the rest. So Inhave ditched the Hornady Critical Duty .357 Magnum load and I am on the search for a replacement.

While I wouldn’t mind having a good .357 Magnum load that is on the lower end of the .357 Magnum scale, like the Critical Duty was, I think I will settle for .38 Special. It will likely be easier to source, and will work in some future projects I have planned. Plus, I can run the wheels off this gun when shooting .38 Special as compared to what I do when it is stoked with .357 Magnum.

I acquired some Remingtom UMC .38 Special +p SJHP not intending it for carry use, but for practice because it was on sale and cheaper than the FMJ on the shelf next to it. Turns out, it shoots POA at 25yd, even though the sights are currently zeroed for the .357 Magnum Critical Duty load. I was quit surprised, and made a mental note. Even though it is an old school round, if it shoots better than everything else it may be a contender in the HTP format, which supposedly has better QC and sealed primers and case mouths.

The load I originally carried in the gun was the Remington “FBI Load”, the 158gr +p LSWCHP. My original issue with this load was the slow reloads due to the soft lead bullet and angular bullet profile getting caught up on the sharp edges of the cylinder’s recessed charge holes. Add to that some fairly significant barrel leading that is a pain to clean, and I am just not sure I want to go back to it fulltime.

I picked up a couple boxes of Winchester’s 130gr +p PDX1 because I had heard some good things about its terminal ballistic performance, but after inspecting the rounds and testing for accuracy I think it is a no go until Winchester fixes their QC problems. The rounds had inconsistent bullet seating depths, and some where not square to the case. A problem I had seen reported about Winchester Ranger. 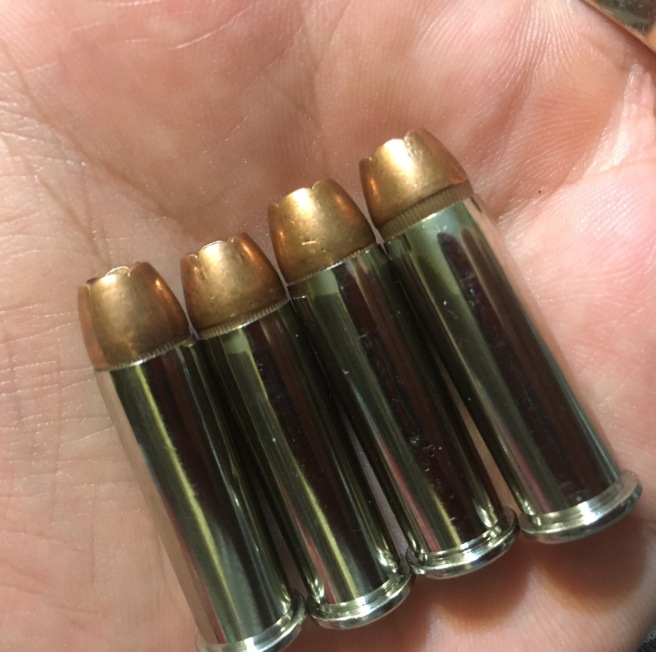 Wouldn’t be a big deal if it still shot well, but it didn’t. The accuracy was certainly sub par for what I can do with other rounds. Even the cheap UMC stuff. Too bad, because ballistically it was a promising load.


So I am still searching for that ideal load that checks all the boxes for relability, build quality, shootability, and accuracy. Could be it doesn’t exist and I have to compromise, but for now, I have many options to explore.

2 thoughts on “The Search”