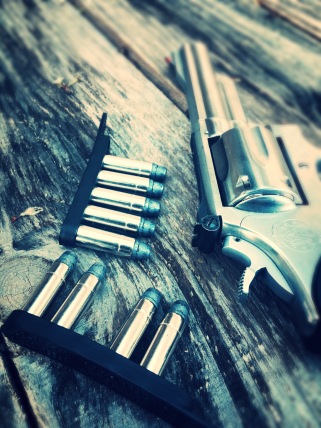 In the concealed carry revolver world, speed strips are probably more commonly carried than an actual speedloader. Speedloaders are bulky, being the same diameter as the widest part of the revolver, the cylinder. The fix to this problem has always been the speed strip. Speed strips, just being a piece of rubber that holds the ammunition, can lay flat in the pocket. So not only are they easier to carry, but often times allow more spare ammunition to be carried because it is easier.

It is nothing to put two speed strips in a pocket, giving me twelve rounds of spare ammunition. Two speedloaders though would be a different story. The downside of course, is speed. I can pull off a reload with a speedloader in 3-4 seconds. A speed strip will take me about twice as long to completely load the revolver. As with many things in life, there is a compromise to be made. A little harder to carry, but twice as fast on the reload, or easy to carry and twice as long to put 6 more rounds into the gun.

There is an important question to ask, what constitutes a loaded revolver? Michael de Bethencourt is the first I saw bring this up in a blog post about using speed strips, and Justin over at revolverguy.com recently brought up a similar question in a post reference the Newhall Shooting. According to Michael, a revolver with a single round in the cylinder, is still a loaded revolver, and can be fired. Claude Werner also discusses partially loading a revolver if that is all that time will permit. With a speedloader, it is kind of an all or nothing affair. With speed strips, we have options. We can load as few as 1, although usually 2 is better and cost us nothing, or as many as 6. This leads to some instructors and spun up revolver guys recommending or carrying speed strips with only four rounds loaded on them. Claude Werner and Michael de Bethencourt fall into that camp. To the best of my knowledge, it is an accepted practice. The logic is that the speed strip is easier to load from with only four rounds loaded onto it in the 1, 2, and 4, 5 positions. Having the extra space on the speed strip helps to handle and load from the speed strip, and the time that it would take to load a 5th or 6th rounds often times is not worth it under time pressure anyway.

Mas Ayoob teaches to use a scalpel style grip with only 5 rounds on the strip, leaving the #6 spot open, even if the reload is for a 6 round revolver. The logic for downloading by one round is to allow more purchase on the speed strip itself, improving the handling of the strip as it is loaded.

I wanted a reload as similar to my speedloader reload as possible, which puts the gun in a different hand than what Werner and Ayoob teach, which I think mitigates some of the handling issues associated with a speed strip. I have not had any issues running a speed strip with 6 rounds loaded onto it, and I use a speed strip grip similar to what Ayoob uses except that I choke up on the strip, and use the same hand to run the strip and rotate the cylinder, rolling the next two rounds into the charge holes as they become available. In dry fire, I have been running a 2 round reload, a 4 round reload, and a 6 round reload against a 4 second PAR. I chose 4 seconds because that is a comfortable dry fire reload with a speedloader and serves as a point of comparison between the speedloader and speed strip. The video below has one of each reload edited together.

The method I use for retaining the speed strip after the partial loads is just something I came up with on my own. I noted on Justin’s post at revolverguy.com that he uses a different technique for retaining the speed strip. As I get more exposure to partial reloads, I may re-evaluate exactly how I accomplish that part of the reload, but it seems to work fairly well for now.

It should also be noted that in dry fire I am not pressing the trigger until I hit a live round on the partial reloads. This will obviously add time to the reload since I do not index the cylinder as I close it, so I would likely have to press the trigger at least a few times before I hit the live round, and this would add some time to the reload.

That gets to the next phase of this experiment. The plan is to hit the range and run it all in live fire, record the times, and then post the results. The timer does not tell lies, and we will end up with a much better idea of which technique is faster, and by how much.

2 thoughts on “Running the Strip”