It has been a busy past couple weeks, with more range time than normal, which has cut into my blogging time. Everything comes at a price right.

I am big on having performance metrics. Tests that are shot only on occasion, that test and quantify skill. These are usually short drills that combine several skills. One that I have used for a while is the FAST. This was a test designed by the late Todd Green that has become almost a standard in the performance shooting world. Most people who are plugged into performance shooting are familiar with the FAST. It is a 6 round drill that includes a draw to a low probability target, an emergency reload, and 4 quick shots to an 8” circle. It is shot at 7 yards, from actual carry gear, and the score is time plus penalties. A miss to the 3”x5” target cost an additional 2 seconds, and a miss to the 8” circle cost 1 second. There are rankings associated with the times. Five seconds or less is considered expert, less than 7 is advanced, less than 10 is intermediate, and over 10 is novice. I have made the habit of shooting this drill about once a year, maybe twice. I don’t want to actually practice the test itself, I want to use it as a measure of the independent skills, practicing the actual test kind of takes away some of its usefulness.

For the first time ever, I shot the FAST with a revolver a couple weeks ago. I knew going in that using the revo was going to hurt my time because of the month long reloads, but did it anyway.

Now for the breakdown, the first shot is slow. I need to get to where I can manipulate the trigger quicker and still stay on the 3”x5” target. I might able to physically, but mentally my mind is telling me to slow down, and it doesn’t need to be. The gun sat at full extension way too long before the shot broke. Then there was the reload. What is interesting to note, is that I can almost shoot this entire drill with a semiauto in the amount of time it takes me to reload a revolver. This is probably why the “New York reload” (having another loaded to gun to transition to), became a thing.

Outside of being a little slow to the first shot, and the reload being glacial, the revolver shooting is not all that much worse than with a semiauto, if at all. I was pleased enough. I think my goal is going to be getting my time under 7 seconds, which I feel is doable.

I must have been on that day, because I also did something I have never done with a semiauto, or any gun actually. I shot a clean Dot Torture at 7 yards. This was my first time shooting Dot Torture with this revolver, and the first time I have cleaned it at 7 yards with any gun. It has been a while since I have shot Dot Torture, so may 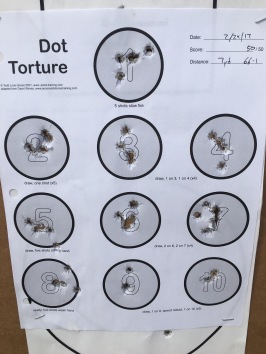 be I just got better, but I am not certain I could replicate that performance with a Glock. The smooth trigger press of the revo really helped. The freestyle shots were all pretty easy, the only really difficult parts were the SHO and WHO strings. Those two strings took a lot of focus. All of the others just sort of happened. I was amazed at how easy it felt to shoot the two handed parts of the drill. When it comes to accuracy at a moderate speed, this gun really seems to deliver. That is something that I have struggled with on a Glock. I can run a Glock fast, and I can slow way down and get good accuracy, but hitting that middle ground has always been difficult. I think it is because of the Glock’s trigger characteristics, whereas my 66 has a very smooth, consistent trigger press.

On another outing to the range, with a steady drizzle, I shot the 5×5. My understanding is that this drill originates with Gila Hayes. The goal is 5 rounds in 5 seconds to a 5” target from 5 yards, repeat 5 times. Lucky Gunner formatted a nice target for this drill, available HERE. This is a really good minimum standard kind of test, and a good way to evaluate the chosen carry gun, the concealment method, and your ability to shoot the gun to a minimum level of acceptability. I chose to shoot this drill because I was wearing multiple layers of concealment, which always complicates the draw process, and would be a good test of whether or not I could meet the standard in sub-optimal conditions. I wanted to see if I could pull off 5 consecutive semi-decent draws. I managed to do it, but had a few snags along the way. I “passed” the drill, but a couple of my draws were less than smooth.

That sums up the tests that I shot. Everything else was working the draw and some recoil management work. I did make a note that I need to raise my grip on the revolver. I am definitely giving something up by not being as high as I can be. This is going to take a little time to work out because I am accustomed to shooting a gun with a beavertail that essentially gives me an upper limit, but I don’t have that with the revolver. I either have to figure out another index point, or devise some other method to make sure I am getting as high as I can on the gun. I definitely realized greater control/less muzzle rise when I made a conscious effort to grip the gun higher.

2 thoughts on “The Late Training Update”