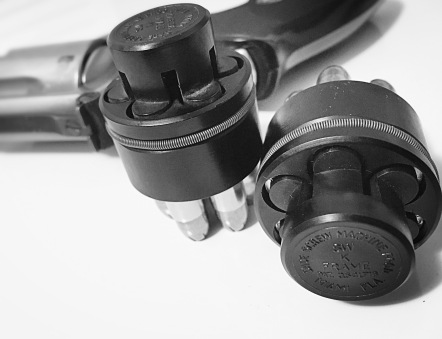 If my google-fu is accurate, the Dade Screw Machine Products speedloader was the first speedloader to actually hit the market, followed by the Safariland and HKS speedloaders that pretty much dominate the market now days. The Dade is an incredibly simple speedloader. The rounds are retained by a coil spring that wraps around the body of the speedloader, when the rounds are pressed into the speedloader the rim of the round is pushed by the coil spring and that is what holds the rounds in the loader. The rounds are released from the loader by pressing the back of the loader like a button, and it pushes the rounds past the coil spring. Given the method of operation, it is a balancing act between the spring having enough tension to retain the rounds, but not so tight that it is too hard to release the rounds from the loader. Because of this, the Dade has one flaw, it will lose rounds if it is dropped from about waist height onto a hard surface. The few people I have heard talk about carrying them said that one flaw is essentially what turned them off to the Dade when other speedloaders became available.

If you can get past the Dade fragging half its payload if it hits the ground, it is really a good speedloader. The process for loading is quick and fairly intuitive, more so than something like an HKS or even a Safariland Comp II.