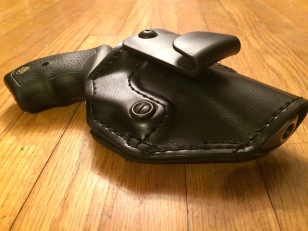 It is not all that uncommon for someone serious about concealed carry of a firearm to have multiple holsters that they have tried through the years for various different guns. I know that I have burned through a small fortune worth of holsters. I have always been relatively pleased by holsters produced by Safariland. Their ALS holster is the best thing since sliced bread for a retention holster. Their Model 18 holster is the best modern take on a classic holster design I have seen yet. I thought the Safariland Model 27 would be a pretty safe bet.

I was looking for a holster for a small revolver. I am not much of a fan for pocket carry, even though I know small revolvers fall into that category. I have always preferred IWB in a more traditional position on the strong side hip. When it comes to IWB holsters there are generally two options in terms of materials used, kydex or leather. Most holsters are one or the other, with only a few hybrids that typically consist of a large leather backing and kydex shell. The benefit of a leather holster is that generally, it is more comfortable to wear. Kydex on the other hand is a more rigid material and tends to offer better retention of the firearm and the mouth of the holster remains open, allowing for easier reholstering of the firearm, but is less comfortable. The Safariland Model 27 incorporates both leather and kydex into the construction of the holster,  but it takes a slightly different tact in how it does it. The holster uses kydex covered in a layer of leather on the upper half of the holster and a leather only lower half. By doing this, the holster maintains the rigidity of the kydex to hold the mouth of the holster open, but has the comfort typically associated with a leather holster. A retention adjustment screw allows the level of retention to be adjusted to the user’s preference as well, which is a nice touch not always included on IWB holsters. The interior of the 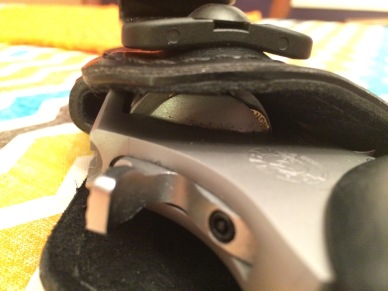 holster is suede lined to protect the finish of the firearm, but has some negative attributes as well. In my experience, if the suede lining gets wet it will swell and make it more difficult to draw the handgun from the holster until it has had an opportunity to dry out. I don’t plan on dunking the holster in a bucket of water, or going swimming with it on either, but you never what life might throw at you.

The Model 27 is secured to the belt via a J-hook. The theory behind the J-hook is that it is a little less likely to be noticed than a standard over the belt clip or some type of loop. I am not sure I agree with the concept in this case because the J-hook is substantial in size fairly noticeable. I have seen some J-hooks on other holsters that are truly “low profile”, but that doesn’t apply here. While a well designed J-hook (which this one is not) might make a holster less noticeable, there are some other things they don’t do well. Since J-hooks do not interface directly with the belt in a way that a standard clip or loop does, they tend to let the holster float around a little bit.

With the Model 27 I found the holster to move around quite a bit, canting forwards or backwards, or even sliding a little on the belt depending on how active I was at the moment. This creates a couple problems. The gun constantly moving around also means that the grip is constantly changing location or angle in relation to my body (i.e. cant). When trying to access the gun quickly this can lead to fumbled draw strokes or a less than optimal initial grip on the gun. The other issue associated with the movement is that the gun can move itself into a position where it does not conceal as well as desired.

The particular J-hook used on the Model 27 is sized for a 1.75” belt, and is not adjustable to different belt widths. I imagine this is done so that it is compa 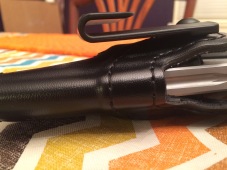 tible with as many belt widths as possible, but it creates more problems. The bottom half inch or so of the J-hook is below the face of cylinder, so when the belt is cinched up it has a tendency to push the barrel into the body of the wearer, and pull the butt of the gun away from the body, making it more difficult to conceal. Under a heavier cover garment like a sweatshirt or fleece, it is not that noticeable. Under a lighter cover garment like a standard polo or t-shirt it is particularly noticeable. More so than other holster designs I have used with the same gun. 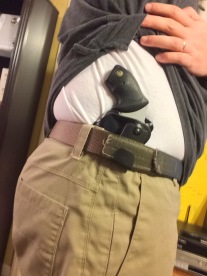 the holster slides up in the waist band until it engages the belt. Some height is necessary to allow for acquisition of complete firing grip on the draw, but I would say that in this case, it is too high.

Despite wanting to really like this holster, and despite the clever kydex and leather combination, this holster really did not work as well with a small frame revolver as I had hoped for. I think it all comes down to the J-hook, how it interfaces with the revolver cylinder, and the “stubbiness” of the gun. With a slab-sided gun like a Glock or 1911, I honestly think this holster would work better, although there would still be the issue of the hook allowing the gun to move around in the waist band. What would be really interesting would be to see the body of this holster combined with the loops on Safariland’s Model 18 holster. That just might be a match made in heaven. 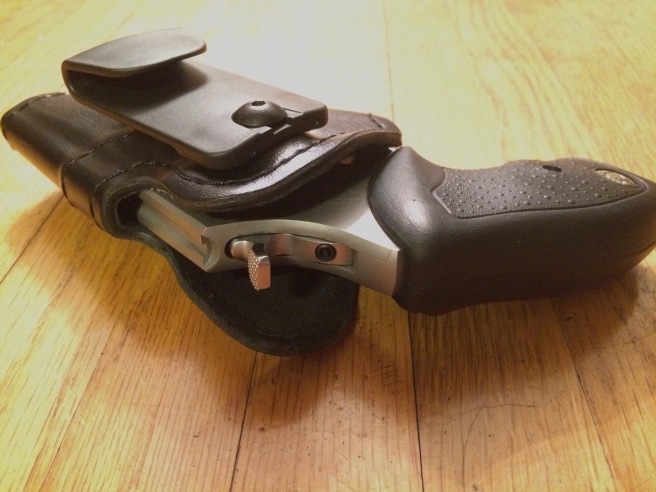